The recently elected Mayor of Royal Wootton Bassett, Councillor Pat Farrow was the guest of honour to present the awards to the winners of our Annual Competition for prints and projected images which spanned three categories; Action; Portrait and Open subject.  This is the first year that prints have been included since 2019 due to the pandemic and attracted a pleasing number of entries. The winning entrants were as follows:

In addition to the Annual Competition, our Mayors Cup competition for projected images, which comprises four competitions throughout the season, was awarded to Robert Slade who received the trophy.

Finally, Honorary Life Membership was conferred to Bob Nunns for his long-standing contribution of service to the club in various capacities and a certificate presented.

After the formalities were over, members socialised with some refreshments and took the opportunity to chat with the Mayor who expressed a genuine interest in photography and enthusiastically explored members approaches to both seeing and successfully capturing images.

Our Annual Competition was judged by Ralph Snook from Bristol PS and featured prints after a two year absence due to covid restrictions, as well as projected images. Entries were received in three subject categories namely Action, Portrait and Open with each member limited to three entries for each category.

Print entries were judged first and attracted a good input with the Open category being the most populated. Once again some creative interpretation was used in the Portrait section which was well handled by the judge.   After a short interval, the projected images were viewed and not surprisingly attracted a very healthy number of entries which added to the challenge for the judge. The evening concluded with selection of the best overall print which was “Shake those feathers ” by Nigel Walkley and the best overall projected image was “Splashdown” by Robert Slade with both winners featuring bird images.

Presentation of trophies for all the winning entries will take place at an Awards Ceremony on June 14th at the Angel Hotel by Councillor Pat Farrow, the Mayor of Royal Wootton Bassett.

Join local professional photographer Jon Ratcliffe as he shares some of his unseen pictures of Swindon’s recently demolished buildings and new developments. From hidden cellars to lost tunnels and rarely-seen rooftop views, see familiar parts of the town in a new light. 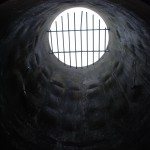 This additional meeting had been arranged specifically to share knowledge and experiences in printing images and their subsequent mounting in readiness for competition submissions. Firstly some potential print suppliers were explored to compare offerings and ease of online ordering. Prices ranged enormously between local print shops to the large online print houses which typically charge around 80p for an A4 print and £1.20 for A3 size.

We then turned our attention to methods of mounting prints for display purposes. Surface mounting the print to a backing board using a spray adhesive is one process that can be used which does require some dexterity in placing the print in exactly the correct position but using a repositional adhesive enables some adjustments to be made. The most popular route in camera clubs tends to be attaching the print to a window mat and securing it with tape. Additionally a backing board can also be used to provide additional rigidity and robustness. Window mats are cut from mat board materials and can be either bought ready made or made yourself using a mat cutter and a great deal of care. Paddy demonstrated how to cut a window mat, attach the print on one edge and then finish by adding a backing board. He also showed various images printed on different photographic papers to demonstrate the effects which can be achieved and also different coloured window mat and backing board materials.

Hopefully the information exchanged and the practical demonstrations will have given people more confidence in producing their own prints and either doing their own mounting or outsourcing. The deadline for print entries for the Annual Competition is May 24th with up to 3 prints allowed in each category of Action; Open and Portrait.

Members were treated to a full evening of audio-visual presentations which had been entered into last year’s Western Counties Photographic Federation Competition. In total 38 AVs had been entered across 3 main categories: Short; Long and Photoharmony.  Short related to presentations that were less than 4 minutes in length; Long included presentations exceeding 4 minutes and a Photoharmony section enabled participants to demonstrate their skills in marrying images through appropriate transitions and strong harmonisation with the sound track. We started viewing some of the unplaced entries before moving to each category and watching the presentations in reverse order. Being able to see the judge’s comments gave further insight into the main characteristics of each presentation and how they were interpreted.

As always the subject matter was diverse ranging from social documentaries covering the covid lockdown experience to vibrant street photography, still life images, unusual connections and exploration of places both in the south west and far further afield. One can only marvel at the skill, patience and creativity that had been used to achieve the final results.